This pretty, pregnant palomino mare was purchased without registration papers through a Wisconsin rescue organization that buys horses from auction. She was brought to auction after her owner died and his relation sent them all off to auction. Per the auction bill, she was part of a big broodmare herd that lived together with a donkey jack (who appears to be well known in his part). Here is a video of them when brought to the auction, including one of the palomino mule foals. She is skittish, and so probably has been a mule-producing broodmare most of her life (but I can’t say that for sure, just a guess from how she acts). She is halter broke and her feet look like they’ve been kept trimmed, but we have not attempted to handle her feet, so I don’t know how she is about picking them up.

She got a coggins, shipped to Wisconsin, had a 3 weeks quarantine with no symptoms, was dewormed, and vaccinated. She was vet checked and confirmed in foal, due probably mid summer; fetus was the “size of a cat” early January. Her teeth were floated; we don’t know her age but by her teeth, she is an older mare, and hasn’t had much if any dental care prior to this. It seems she has been handled very little in her life. Although she has a kind nature, she is suitable for an experienced handler, not someone new to horses.
She and her herdmates were obviously well fed prior to the sale. I have been feeding her soft hay, alfalfa pellets, soaked beet pulp, and pelleted grain taylored for pregnant mares. She loves to eat! Will quid if fed coarse hay. After she foals, she should probably have another dental when she can be more deeply sedated, especially if she is going to be bred back again.
She is about 15.2hands, a pretty nice mover, appears sound, without any apparent injuries. or scars. She stays in a one-wire electric fence, and has been perfectly content to be by herself. She is very easy to have around, and is a welcome sight to come home to!
Asking $2500, which is roughly what I have spent on her.  The decision to buy her was in response to a Facebook post that some pregnant mares needed rescuing from this auction that very same day. I wanted to help her out of a bad situation in the hopes that there is someone who would love to have a mule foal from the start, and very possibly a palomino or buckskin mule baby.
A pre-purchase exam is welcome 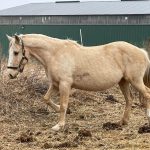 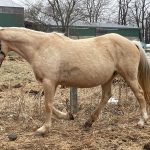 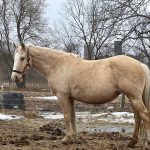 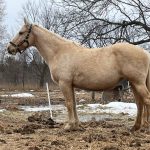 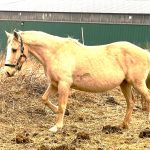